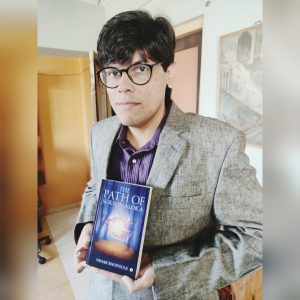 Today, we are here with another debutant, Nihar Bhonsule, whose book The Path of Sukshmaloka has enraptured the fantasy readers. Let us hear out his views on writing and this publishing world.

First of all, congratulations on your book. How do you feel being a published author?

Nihar Bhonsule:  Thank you so much! It truly is an amazing experience. I’m living the dream! It is something I had been working on and looking forward to since 10 years.

As you are a debutant, our readers will be keen to know about your background. Would you mind telling something about Nihar Bhonsule?

Nihar Bhonsule: I completed my IGCSE and A Levels from the University of Cambridge where I gained specialty in Economics, English Language and Art & Design Studies. I nearly secured a seat in the London School of Economics for a BSC in Economics, but couldn’t pursue it because of personal reasons. I later completed my Bachelors in Mass Media in India and majored in Advertising. I am an intensely creative individual. I enjoy films, games and books. I have several game stories, scripts and unpublished novels in the Work In Progress portfolio.

Give us a gist of your novel and why do you think people should read it?

Nihar Bhonsule: Before answering this question I would like to take a short detour… So, back in the days of the Mahabharata Era, there were various kinds of creatures. This is not my author’s imagination at go (laughs). Even many scriptures speak of them. They were part human and part reptilian. They were known for their thirst to dominate in unjust ways. Species similar to their kind were even known to inhabit Khandavaprastha, the dilapidated city which the Pandavas later graciously transformed into Indraprastha. Those who have some knowledge of Mahabharata will know of this. So, Lord Krishna’s divine presence on Earth in those days had the creatures existing in harmony with humans and all the other beings. It is unknown however, what happened of these beings when Krishna parted from us.

That is basically where the central premise of the ‘The Path of Sukshmaloka’ takes place and that is exactly why people ought to check it out. It ventures into that area of a story that we don’t know about yet. What happened to those reptile-like creatures? Do they still exist? Did they rise to fulfil their unjust desires after Lord Krishna left? If such dangerous creatures are alive, what does the distant future hold in store for humanity? The Path of Sukshmaloka talks about all of this.

Apart from that the main highlight of my book readers would enjoy is; the concept of the dimension of Sukshmaloka itself.

That’s fascinating. I have read the preface of your book. It sounds interesting to know about how you drew your inspiration. I would like to know, how difficult/easy was your writing journey?

Nihar Bhonsule: From the preface you must know, this basically began when I was very young. I had a fascination with Superheroes. The idea of a brave, mysterious masked-man rising against a twisted order of living really appealed to me. I used to create comics out of drawing book paper and make the art with regular crayons and a pencil. In college days I transcribed the ideas for those comics into a first draft for a book. But then as it occurs with most first drafts, it didn’t seem good enough. The concepts felt raw and severely lacking. Then, for a period of roughly a year, I gave up on the idea. All until I began reading about the Mahabharata, Bhagwad Geeta and several other scriptures. That was when I felt heavily inspired by the uplifting teachings. All of that with my father’s valuable insights on spirituality gave me the ultimate idea to add immense depth to the super-hero story. Thus was born…The Path of Sukshmaloka.

Do you think good reading makes a good writer? What kind of books do you read?

Nihar Bhonsule: I would agree partially on this. Good reading surely improves your command over language and does improve your imagination to an extent. But then it doesn’t help generate unique ideas. The uniqueness in your novel will only come from a lot of life experiences and extensive research you perform and knowledge you acquire, over the course of writing the novel.  However, that doesn’t mean reading is any less important. Yes there are some genius authors out there who have written masterpieces. I personally love reading all genres of fiction. I am not much of a non-fiction or self-help book person.

Which book has made the most profound effect on your life; as a writer, or as a human?

Nihar Bhonsule: It would be unfair to name any one book. There are many that have made effect on my life as a writer. I would be discrediting several authors by choosing a single book. But to speak of some, there is Bram Stoker’s Dracula, J.K Rowling’s Harry Potter, Stephen King’s Dark Tower Series, Mario Puzo’s Godfather series, Amish Tripathi’s Shiva trilogy and various other amazing books.

Writing is one thing, publishing is another. What is your take on self-publishing or traditional publishing?

Nihar Bhonsule: The book industry has been facing a rapid decline over the years and more so with the blooming of the Netflix Era. With the given circumstances, I respectfully salute the efforts of both the traditional publishers and self-publishers in paving a path to boost reading. Both are doing a commendable job in maintaining the market for books and ensuring they reach the right target audiences. It would be unfair to say one is better than the other. Both are contributing their efforts uniquely and immensely towards reviving and maintaining the book industry.

Who are your favourite authors?

Nihar Bhonsule: As I said earlier there are many favourite authors. However if there is any author who has amazed me beyond words, it is the reverential, Late Bram Stoker.  He crafted his masterpiece ‘Dracula’ using the format of a series of journal entries and reports by adapting his writing style to the tone of each medium throughout. I always felt amazed by his exceptional brilliance at story telling. The book successfully fleshes out the notorious, blood-sucking Count Dracula and makes you feel like he actually treaded the Earth at some point in time.

No success comes without criticism. How do you brace yourself towards criticism?

Nihar Bhonsule: Of course, that is so true. You see writing is a form of art and expression. There will always be those that understand the message behind your writing and those that do not. Good art has always been subjective because of its abstractness.

If you go down in history there are several movies and books that have had a lot of criticism but over time have become classics. So although it is tough to bear with criticism many times, I find comfort in the fact that, criticism for your work means you are living up to the basic foundation of art, which is in pure abstractness and openness to various perspectives and interpretations. Art must never strive to appease or even enforce, for that matter.

Now, as you make a mark in the literary world, I am excited to know your future plans. Are you planning for a series? Or are you going to dig up a new genre for your next book?

Nihar Bhonsule: A sequel to The Path of Sukshmaloka is surely in the making since the story ends on a very high note. There are a lot of interesting elements of the story left to be told like further details on the other boons possessed by Dharmayodhas, Prithvi Sen’s destiny, Sarpa’s vicious final plan and more such. The plan for the sequel is complete and the book is in the works. The sequel will attend to several questions left unanswered and at the same time, will have a tremendously intense and unique story in store for readers. As for the second part of your question, apart from the sequel of The Path of Sukshmaloka, I also have a finished manuscript for a completely new book in the ‘Thriller’ genre.  So yes, there is a lot of fun stuff coming up.

Book Title: The Path of Sukshmaloka